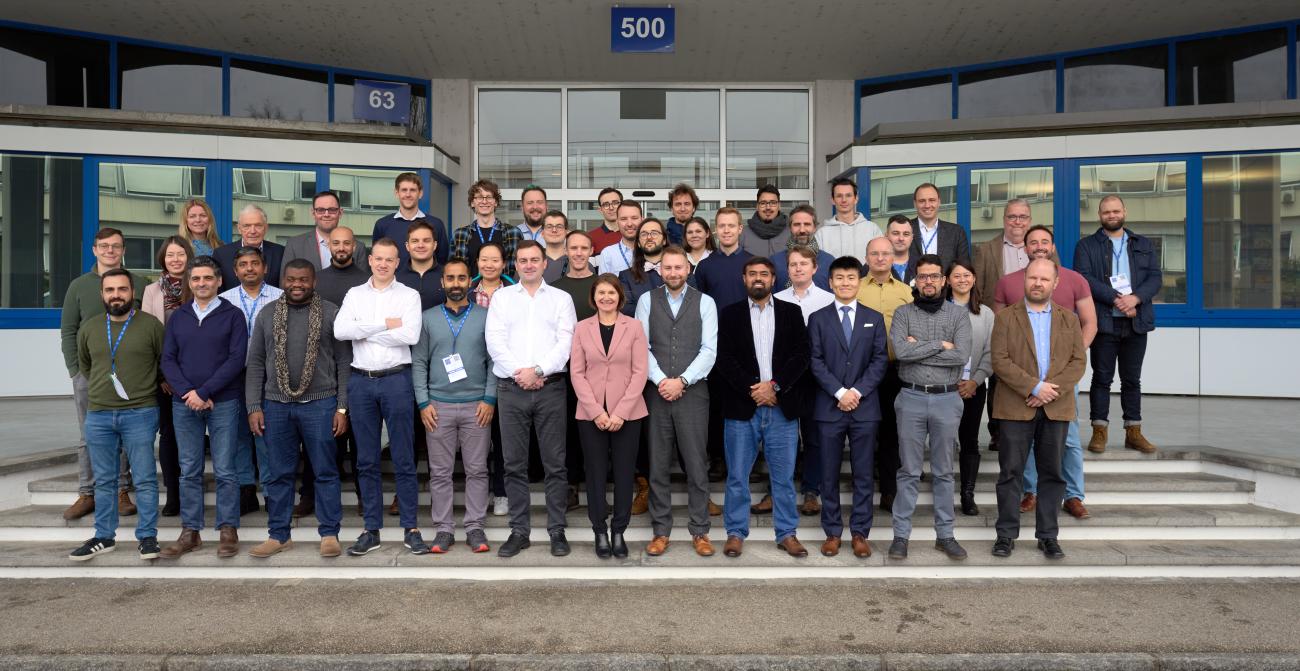 Last week, members of the EU’s CoE RAISE project met at CERN for their “All Hands” meeting. This innovative project is developing artificial-intelligence (AI) approaches for next-generation “exascale” supercomputers, for use across both science and industry. Use cases explored through the project include the optimisation of wind-farm layouts, design of efficient aircraft, improved sound engineering, seismic imaging with remote sensing, and more.

CoE RAISE, The European Center of Excellence in Exascale Computing “Research on AI- and Simulation-Based Engineering at Exascale”, is funded under the EU’s Horizon 2020 research and innovation programme. The project launched in 2021 and runs for three years. Discussions to plan for a potential follow-on project were also held during last week’s meeting.

The four-day meeting, which took place in CERN’s Council Chamber, was attended by 54 project members. The participants discussed progress made in their work to develop AI technologies for complex applications in Europe running on future “exascale” high-performance computing (HPC) systems. Exascale refers to the next generation of high-performance computers that can carry out over 1018  floating point operations per second (FLOPS). Today, only the Frontier supercomputer at Oak Ridge National Laboratory in the United States has reached this level. However, with more exascale HPC systems just over the horizon, it is important to ensure that AI approaches used in science and industry are ready to capitalise fully on the enormous potential. In June, the European High Performance Computing Joint Undertaking (EuroHPC JU) announced that Forschungszentrum Jülich GmbH in Germany has been selected to host and operate Europe’s first exascale supercomputer, which is set to come online next year and will be known as the Joint Undertaking Pioneer for Innovative and Transformative Exascale Research (JUPITER) system.

CoE RAISE is developing innovative AI methods on heterogeneous HPC architectures involving multiple kinds of processors. Such architectures can offer higher performance and energy efficiency, but code must be adapted to use the different types of processors efficiently. The AI methods being developed are focused around nine key use cases and designed to scale well for running on exascale HPC systems.

CoE RAISE supports technology transfer to industry, particularly small- and medium-sized enterprises, as well as running education and training initiatives. On top of this, CoE RAISE also provides consulting and connects to other European initiatives to maximise synergies, exploit opportunities for co-design and share knowledge. All aspects of the project’s work were discussed over the four days at CERN.

CERN is also a partner and brings one of the use cases to the project. This work focuses on the improvement of methods for reconstructing particle-collision events at the upgraded High-Luminosity Large Hadron Collider (HL-LHC), which is set to come online in 2029. The HL-LHC will see more particle collisions than ever taking place, producing exabytes of data each year, resulting in unprecedented computing challenges. To reconstruct particle collision events today (with datasets in the order of terabytes or petabytes), hundreds of different algorithms run concurrently: some are traditional algorithms optimised for particular hardware configurations, while others already include AI-driven methods, such as deep neural networks (DNNs). The members of the project team at CERN are working to increase the modularity of systems and ensure code is optimised to fully exploit heterogeneous architectures, as well as increasing the use of machine learning and other AI methods for reconstruction of collisions and classification of particles.

“Supercomputers are reaching the exascale and enabling the delivery of an unprecedented scale of processing resources for HPC and AI workflows,” says Maria Girone, CERN openlab CTO, who leads CERN’s contribution to the project. “The research performed in CoE RAISE will drive the co-design of HPC computing resources for future AI and HPC applications for both science and industry. This meeting enabled us to exchange and develop ideas and to bring new perspectives. It also gave researchers from other domains a unique insight into the environment and challenges facing CERN, enabling cross-fertilisation and understanding.”

“The participants in the meeting – some of them having seen each other for the first time in the project due to COVID-19 restrictions – made new friends and initiated more intensified collaborations on emerging topics, such as the integration of quantum computing in AI and HPC workflows,” says Andreas Lintermann of Forschungszentrum Jülich GmbH, who coordinates the project. “Members went home with new strategies in mind for fostering their implementations and ensuring sustainability, with the goal of creating impact in the final year of the project and beyond.”