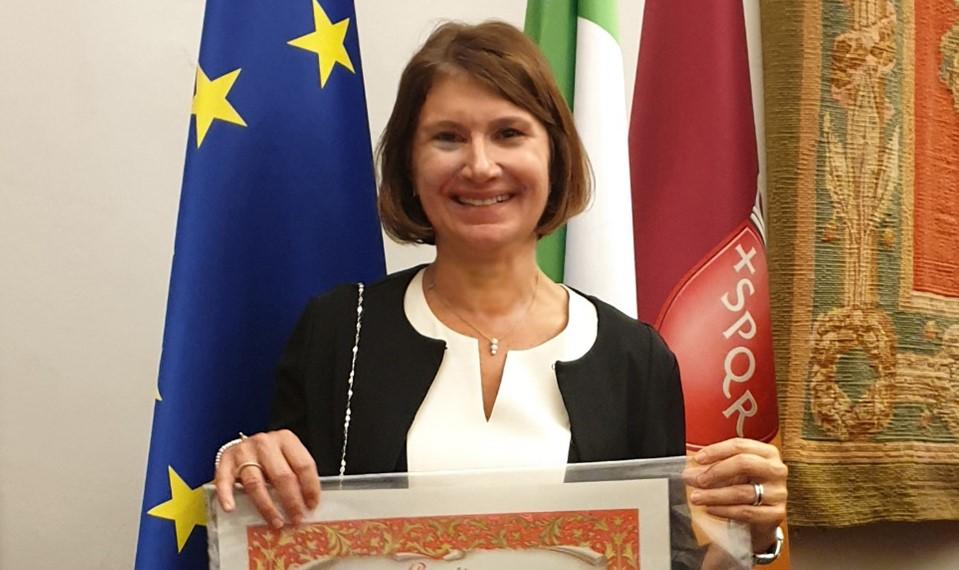 On Tuesday 18 October 2022, Maria Girone, the CERN openlab Chief Technology Officer (CTO), was awarded the “La medaglia d’oro Calabria” (the Calabrian Gold Medal). The ceremony took place in the famous “Campidoglio” in Rome, Italy. The prize is awarded by the “Brutium” association, which recognises those from the Calabrian region of Italy for their contribution to society through fields such as science, art, education, industry, and journalism.

Girone received the award for her contribution to particle-physics research and scientific computing. Girone has worked in scientific computing at CERN since 2002, contributing to projects such as the Worldwide LHC Computing Grid (WLCG), the global grid-computing system used to store, distribute, and analyse the data produced by the experiments on the Large Hadron Collider (LHC). In 2014 and 2015, Maria was also the software and computing coordinator for one of the four main LHC experiments, CMS. Since 2016[ARP1] [MG2] [MG3] , she has worked as the CTO of CERN openlab, a public-private partnership that accelerates innovation in the cutting-edge computing technologies needed by CERN’s research community.

Girone is also a champion of diversity in scientific computing. Since 2015, she has led the diversity working groups of the International Workshop on Advanced Computing and Analysis Techniques in Physics (ACAT) and the International Conference on Computing in High Energy and Nuclear Physics (CHEP).[ARP4]  She recently proposed a new Swiss Chapter for Women in HPC[ARP5] [MG6]  and is one of four co-founders of IDEAS, a not-for-profit association under Swiss-law for inclusion, diversity, and equity in advanced computational science.

“It is a great privilege to receive this prestigious award from my home region in Italy,” says Girone. “I am proud to honour my birthplace as a scientist at CERN, where I have been working for over two decades now, collaborating with fascinating people from all around the world and driving innovation in research computing. CERN is truly a place like no other.”

Attendees at next week’s International Conference for High Performance Computing, Networking, Storage, and Analysis (SC22) have the opportunity to learn more about Girone’s work. On Wednesday 16 November at 17:30 CET (10:30 CST, the local time in Dallas, Texas, where the conference is being held), Girone will give a special invited talk on exascale computing challenges at CERN. The presentation will also be available to virtual attendees via the SC22 website.